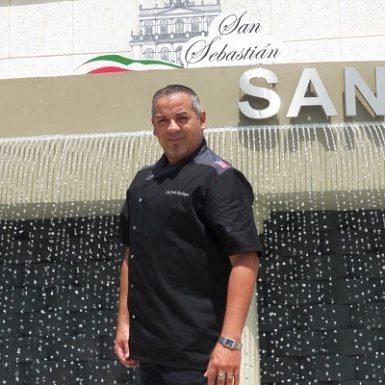 Currently a resident of the town of San Sebastián, his passion for food began at the age of 14 while working at a Chinese restaurant. A graduate of the San Juan School of Hospitality, in 2008 he was sous chef at the Pedro Rosselló Convention Center under Chef Luis Álvarez and Chef Fico. He also worked at the Aguadilla Marriot with Chef Aneudi García. He was supervising chef for the kitchen during the Central American Games in Mayagüez under Executive Chef Elvin Rosado. His passion for food led him to open his own restaurant, Safari Bar, and Grill, in San Sebastián, specializing in exotic meats such as crocodile, buffalo, kangaroo, ostrich, and exotic paellas.

As the owner of Alderan Catering Services, for the past ten years he has travelled throughout the island, evolving and offering paellas prepared on site. His specialty in this area is the paella jíbara consisting of 12 native meats, pasteles, and pork skin; although he also prepares traditional shellfish, Valencian, and creole paellas. This is why his Facebook followers call him the Lord of the Paellas or Paella Man.

Chef Carlos Rodríguez is also professor of Culinary Arts at IBC in Aguadilla and has had the honor of working for the Chief of Police, the Mexican Consulate and the Department of State under Secretary Bernier.  He also participates in Saborea Puerto Rico 2015-2016, Plaza Food Fest 2016 – Del Campo a la Ciudad, Summer Flavors 2016 in Bayamon and UNE Food Fest 2017.