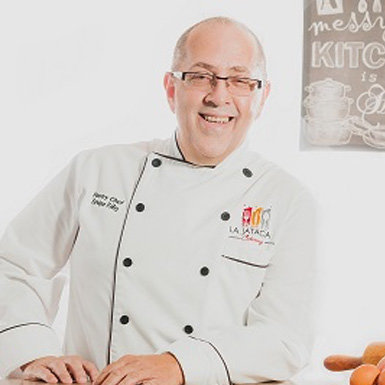 Born in Caguas, he specializes in baking and pastries. He has a passion for the art of baking since childhood and follows his aunt’s footsteps who was a baking/pastry professor for the Puerto Rico 4H Clubs and who introduced him to this fascinating field. He studied baking at different institutions as well as training at the Wilton baking academy. His formal education is at the Instituto de Banca y Comercio-Caguas campus.

He is an invited chef to the COCINANDO CON UNCION program and a member of the 2011 culinary team representing Puerto Rico. Currently, he works at the Instituto de Banca y Comercio in Caguas, where he teaches baking.

He was co-founder of the IVAC School of Culinary Arts in San Lorenzo; he is a partner of the La Jataca Catering Company, in charge of baking and pastries. In August of 2013 he participated at the successful culinary event Wine and Food Fest in the town of Aguada. He won the 2013 first edition of the Cup Cake Challenge from North to South in the city of Ponce and in 2014 was invited to be a chef at a demo kitchen. He has been invited to several gastronomic fairs such as Plaza Food Fest, summer edition, and Plaza Christmas Food Fest. In November 2015 he was the pastry chef at the Pastry Lovers Fest.

For over 30 years Chef Enrique Vélez has been a lover of sweets and good cooking. More recently he is invited to the Bubbles and Bites event at Saborea Puerto Rico to be held at the pool area of the Sheraton Hotel-Convention Center.