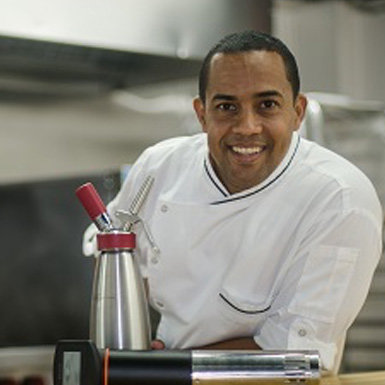 Fernando Parrilla, is originally from San Juan, Puerto Rico, he got interested in the culinary arts at a young age. He studied in Instituto de Banca y Comercio of Hato Rey. When he graduated he went to work in the kitchen of the Caribe Hilton Hotel, he remained working there until 1999, then he decided to continue studying in the culinary school Jonson & Wales in Rhode Island, while he was studying he worked in the five star restaurant Agora. When he finished studying he returned to Puerto Rico and began teaching for five years in the culinary arts department in Instituto de Banca y Comercio then he was the coordinator of the program for another five years. In 2011 he was named Director of the Culinary Arts program at MBTI. Chef Parrilla became a part of the Culinary Team of Puerto Rico in three occasions 2003, 2007 and 2011, being a part of the team was a dream come true and being able to represent Puerto Rico in culinary competitions was always one of his greatest aspirations and he did it, he won best chef of the Caribbean in 2007. Chef Parrilla is owner of Crispy & Relleno, Piñones Bistro.  His favorite cuisine is Caribbean because of the richness of colors, aromas and flavors in the ingredients.