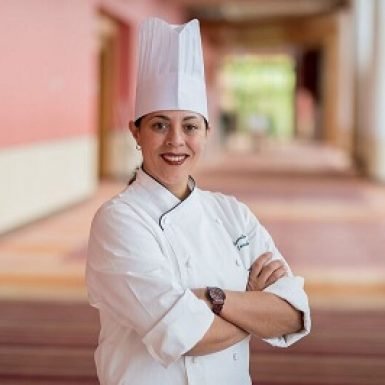 Chef Jannette Berríos has over a decade of experience in the Culinary Arts within the Hospitality Industry.  She began her professional career in 1998 at the San Juan Ritz Carlton Hotel, Spa and Casino, where she held various positions, such as Banquet Chef, Sous Chef and Chef de Cuisine.  At the San Juan Ritz Carlton she specialized in international cuisine under the mentorship of Chef Alain Gruber. Chef Berríos also lent her talent to the Atelier Restaurant at the Central Park Ritz Carlton in New York City and at The Dining Room of the Ritz Carlton Atlanta.  These two landmark properties allowed her to enhance her culinary skills in French and Mediterranean Cuisine.

In 2006 Chef Berríos joined Norwegian Cruise Lines where she held the Executive Sous Chef position in various cruise ships such as:  Pride of Hawaii, Pride of America, Pride of Aloha and Norwegian Wing.   In these ships she managed the daily operations of six (6) international restaurants and while traveling through the Hawaiian Islands developed her talents and passion for the Pacific Rim Cuisine.

In the summer of 2007, Chef Berríos was appointed Executive Sous Chef at the cruise ship The World of the Resident of the Seas.   This opportunity gave her the ability to experience the most important Mediterranean and African Ports which included  Barcelona, Lorraine, Venice, Civitavecchia, Dubrovnik, Havre, Dakar, São Tomé, Lüderitz and Cape Town.

After being at sea for over a year Chef Berrios moved back Puerto Rico to open La Concha Resort as Executive Chef, position which she held for six (6) years. On September 2013 Chef Berrios accepted the opportunity to continue her career as Executive Chef providing her broad international culinary talents and Puerto Rican flavor to the Sheraton Puerto Rico Hotel and Casino, where she is currently working.

Throughout her career she has received numerous awards and recognitions.  In 2002 she was the first woman selected for the Puerto Rico Culinary Team winning a Gold Medal and was also awarded the Gold Medal in the Caribbean Atlantic Competition.  In 2005 she received the Chaine des Rotisseurs Silver Medal at the USA Finals making her the youngest member ever elected to the San Juan Chapter. Most recently, Chef Berrios was selected winner for the Marriott International 2016 Award of Culinary Excellence -Executive Chef for the CALA Region.