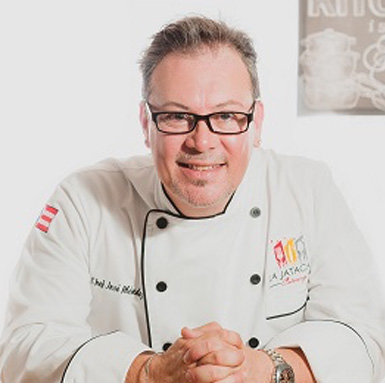 In 2012 he participated and won as Chef of the Week in the Four Chefs, One Dish program. He was an invitee as chef to the Jeep Racing event at Hacienda Sabanera in the town of Cidra. He worked with renowned chef Rosita Rosado offering seminars in gastronomy at her teaching center. He was a participant in the North to South competition in Ponce and collaborated with the American Cancer Society at its Walk for Life event. He was chosen as one of the ten most important chefs in Puerto Rico to participate at the Top Chef Porta del Sol competition in the city of Mayagüez and was a special guest at Plaza Las Américas’ prestigious Plaza Christmas Food Fest and Plaza Summer Food Fest. He has participated at different demo kitchens for the Department of Agriculture, Agrópolis 2014, North to South Culinary Fair 2014, and as a presenter for the Department of Sports and Recreation offering health nutrition seminars at the Roberto Clemente Coliseum. More recently he was invited to be a chef at the 2015 Saborea Puerto Rico where he partook in two of the most celebrated and successful event activities: Bubbles and Bites at the Puerto Rico Sheraton and, along with Food Network’s Chef Susy Jiménes and other local and international chefs, he opened the educational event, one of the most important platforms of the island’s gastronomic industry. He is also the creator of the Brunch Menu at the Taco Express restaurant.

He established his gastronomic Company, La Jataca Catering in May 2012 where he Works as Chief Chef and professor of private seminars.

In addition to working as kitchen chargé at several establishments, as well as Sous Chef at The Readers Restaurant in Río Piedras and Buffalo Grill in Caguas, he was director of the IVAC culinary and pastry school in San Lorenzo. In the culinary field he has studied the art of Garde Mange where he trained as an instructor. Currently, he is professor of culinary arts at the Instituto de Banca y Comercio recinto in Humacao, P.R., and collaborates in the gastronomy section of the NAUTICA Magazine.