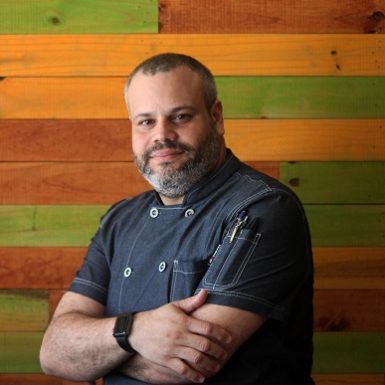 Luis Vázquez Soto was born on July 18, 1977 in San Juan, Puerto Rico. As young as 15, he was exposed for the first time to the culinary world by his mother who was the administrator of a small kitchen. He was eager to learn, taste and try out new things, and quickly fell in love with the kitchen. While studying business administration, he started working as a server and skillfully managed his way into the kitchen as an expediter. Vázquez would not settle and began working on ideas to develop a business of his own. However, considering it was still premature, he also worked as restaurant manager to continue learning about this business’s administration.

In 2001 he opened his own catering business. He rented a commercial kitchen where he further developed his skills and culinary talents. After 15 years of serving thousands of guests and managing from logistics to amazing presentations, he began the construction of his own establishment. When Puerto Rico was struck by the devastation of hurricane María in 2017, many businesses went bankrupt. However, Vázquez saw an opportunity to help people and maintain his business at the same time and began serving food to go. The expert preparation of his plates and great taste quickly earned him clientele. Today, he owns two commercial kitchens and a restaurant called El Granero Grillhouse in San Juan, Puerto Rico. In less than a year, the taste, technique, and overall experience of his restaurant has caused commotion and awe in the culinary world. Vázquez has been interviewed in several radio and tv programs and his restaurant has been recognized and highlighted by multiple entities that evaluate the culinary businesses. Currently, El Granero is rated among the best restaurants in San Juan and has been awarded several recognitions among the industry. His unsettling nature, hard work, charisma and his drive to conquer the culinary world continually creating delicacies full of taste and great technique, have been without doubt the secrets to his non stopping success.