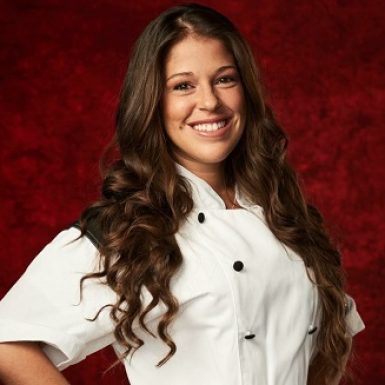 More about Mia
More about Mia Castro
Mia Castro's background with food and cooking roots back to being home with family. Growing up in San Juan, Puerto Rico and being raised partly by her grandparents gave her a deep appreciation for fresh and wholesome food. She grew up helping her grandmother cook delicious meals every day with ingredients they harvested themselves. Upon High School graduation, she went on to formally study food and cooking at The Culinary Institute of America in Hyde Park, NY. There she gained insight into the field and prepared herself for future endeavors. After graduating from college with an Associate's degree in Culinary Arts, and a Bachelor's degree in Hospitality and Management, she moved to Las Vegas, where she worked as an apprentice for established Chefs she had always admired, such as Wolfgang Puck, Thomas Keller, and Jose Andres. She has also made several TV appearances. While in Vegas, Mia competed on Food Network's hit show, Chopped. Rivaling three male Executive Chefs at the mere age of 23, she made it to the final round where she was barely defeated by the Executive Chef of Sensi at The Bellagio. And only 5 years later, at age 28, was invited to compete on Fox TV’s hit show, Hell’s Kitchen, hosted by world-renowned chef, Gordon Ramsay. Her season (18) featured Rookies vs. Veterans (Mia being considered a rookie). Before being defeated by veteran contestant, Chef Ariel Fox, she became the most winning challenge contestant in the history of the show, and the first Puerto Rican to make it to the final. A Caribbean Native, she decided to move to Miami to be closer to her roots. There she had the opportunity to work for a number of accomplished local chefs, who were involved with local and sustainable agriculture, a practice she finds important and actively implements in her career. She currently works as a NYC based, full-time private chef for clients across the United States as well as international travel.