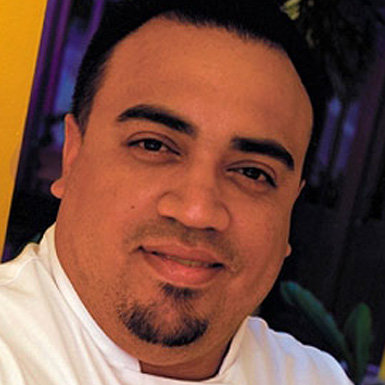 Known for his popular phrase “Keep Cooking” Chef Santiago was raised in the mountain town of Cayey, Puerto Rico and descendant of a family of bakers, Chef Angel Santiago first enrolled at the University of Puerto Rico in Mayaguez to study Civil Engineering. His passion for cooking was stronger than design and construction so he moved in the opposite direction from his original plan.

His experience of over 10 years as Executive Chef and culinary professor has allowed him to participate in culinary competitions such as Al Gusto de Sams, Master Chef Latino 2011, where he was a finalist, . Also he has been a personality Chef on Saborea, Plaza Food Fest and TV shows. Santiago has been part of the Puerto Rico Culinary Team since 2012  were he obtained Gold, Bronze Medals and the Best Culinary Team and will represent PR again in 2013.

Honoring his culinary flavors and talents in the kitchen, Chef Santiago has been part since 2012 of the Puerto Rico Culinary team where he has won Gold, Bronze Medals and the Best Culinary Team. He has been named Top Chef by Foodiespr and in 2010 “The Chef with the hands of gold” by Buena Mesa in Imagen Magazine.

Currently, Chef Santiago works as Executive Chef of Lola Eclectic Cuisine, the trendiest restaurant in the city of Ponce. At Lola’s, he brings his experience and soul in to developing a menu to please it clients.

Before working in Lola, Santiago was the Executive Chef of the Radisson Ambassador Plaza in Condado and Jajome Terrace Restaurant in his hometown of Cayey, among others.