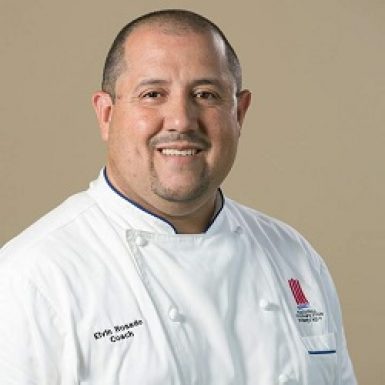 Natural of the Town of Vega Alta and graduate of the University of Puerto Rico Carolina Campus in 2004, Elvin T. Rosado Agosto obtains a bachelor degree in Hotel and Restaurants Administration. By then, he had practiced his skills at the Omni Rosen Hotel in Orlando, Florida (1996), and had been part of the “opening team” of the Ritz-Carlton Hotel of Puerto Rico (1997), where he worked for six years. Here he developed in all areas of international cuisine. His specialty was in Stocks and Sauces, becoming Chef de Partie and the hotel “Saucier” for the last three years he worked at the company. Being part of the Ritz-Carlton team, he worked as Professor of Culinary Arts for 1999 at the Instituto Méndez Áurea E. Méndez (IVAEM) in Caguas. For the year 2003 he decided to dedicate himself to full-time teaching as part of the founding team and Sub-Director of the Culinary Arts and Pastry Arts programs at the Universal Career Institute in Hato Rey, Humacao and Manatí, where he worked for one year.

In 2004, he decides to accept more professional challenges and he works as Chef Consultor in the Piccolo e Posto Restaurant in Caparra for three months; soon begins to work as Executive Sous Chef and part of the opening team of the newly inaugurated Holiday Inn San Juan. For January 2005 he is part of the Culinary Team of Puerto Rico, winning a gold medal, and also winning an individual gold medal, thus second place in the Caribbean in the “Taste of the Caribbean” competitions held in Miami, Florida in June of the same year. For September 2005, he was promoted to Executive Chef of the Holiday Inn San Juan, where he worked until August 2008. He belongs to different organizations, such as the Puerto Rico Hotel and Tourism Association (PRHTA), Caribbean Hotel Association (CHA).

For 2008 he was selected as the new Coach of the Puerto Rico Chef National Team, winning a gold medal at the Taste of the Caribbean celebrations at the Caribe Hilton in San Juan in June 2009. For 2010 at 2012 he was chef and professor of culinary arts at the University of Puerto Rico Carolina Campus and at ICPR JR College in Bayamón. For 2010 he was the Executive Chef of the Central American and Caribbean Games Mayagüez 2010 where he was in charge of the Central kitchen in charge of over 100 employees and in charge of the food of over 16,000 people daily. For 2010 after finishing the games, he begins as Sous Chef of the Embassy Suites Dorado del Mar. In 2011 receives a contract with the University of Puerto Rico Carolina Campus to be in charge of several projects related to the area of ​​Gastronomy of the School of Hospitality and Tourism. In 2012, he joined the Chef’s Cuisine at the Sheraton Convention Center. In 2013 he received an offer to become the Executive Chef in Texas de Brazil at the Sheraton Convention Center. In the Year 2015 he was hired by the International Meal Company (IMC) at the Luis Muñoz Marín Airport where he served as Executive Chef at the opening of the Casa Ávila Restaurant. That same year he receives an offer as Executive Chef of Hotel Verdanza in Isla Verde where he works until the present. In 2011 he was awarded the Excellence Award Manuel G Medina Escalera 2011 Dream Team of the Cultural Center of his town of Vega Alta and in 2014 he was awarded the Honorary Students Award of the Accredited School Adelaida Vega where he studied from Kindergarten up to Ninth Grade. The chef catalogs these awards as the most important in his entire professional career.

As Coach of the National Team of Puerto Rico has won several medals and awards for the Island among them:

Chef Rosado defines his cuisine as a fusion of Caribbean, French, Oriental and Puerto Rican flavors, what the Chef has define as Caribbean Nouvelle Cuisine. He is a fan of the combination of spices and elaboration of Sauces. He define his Style as Classic and Creative.